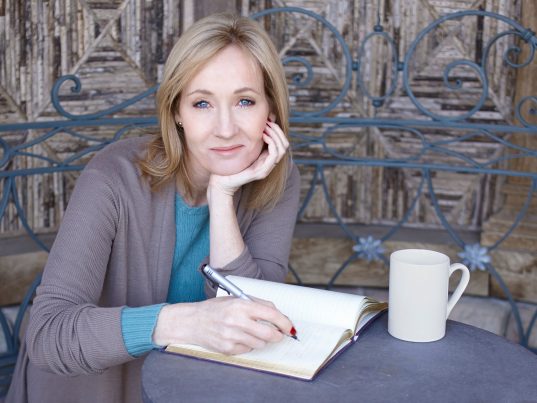 JK Rowling, the author of the wildly popular Harry Potter series, sure is talented when it comes to creating fantasy worlds.

Over the past few days, Rowling, who isn’t exactly a fan of President Trump, has been criticized for falsely accusing Trump of snubbing a young boy in a wheelchair when the boy reached out for a handshake.

Citing an edited video of the encounter, Rowling took to her Twitter account and accused Trump of, among other things, “having a corrosive effect” on “civilized norms.”

“Trump imitated a disabled reporter. Now he pretends not to see a child in a wheelchair, as though frightened he might catch his condition,” Rowling said to start her multi-tweet rant. “My mother used a wheelchair. I witnessed people uncomfortable around her disability, but if they had a shred of decency they got over it. So yes, that clip of Trump looking deliberately over a disabled child’s head, ignoring his outstretched hand, has touched me on the raw.”

But the famed author of the Harry Potter books didn’t stop there. She continued, “That man occupies the most powerful office in the free world and his daily outrages against civilized norms are having a corrosive effect.”

However, unedited video of Trump’s encounter with the boy in the wheelchair tells a much different story than the one JK Rowling tweeted out to her followers. In the unedited video, Trump is seen approaching the young boy first, bending down and shaking his hand. Furthermore, everyone else in the room is smiling, which definitely wouldn’t have been the case had Trump really snubbed the handicapped boy.

Not long after JK Rowling’s Twitter rant, a woman who claims to be the disabled boy’s mother defended the President on Facebook. “If someone can please get a message to JK Rowling: Trump didn’t snub my son and Monty wasn’t even trying to shake his hand,” the boy’s mother wrote. She posted a picture of her son holding up a pretend secret service patch and excitedly showing it to President Trump, which is obviously a lot different than the harsh version of the story told by JK Rowling.

You would think that JK Rowling would immediately apologize to her social media followers for lying to them and to President Trump for accusing him of doing something he didn’t do. But after several days of silence, the best Rowling could do was offer an apology to the boy’s mother, but not to President Trump.

Needless to say, there is something very wrong with using a disabled boy to attack the President of the United States. If it seems as though JK Rowling was intentionally searching for something she could use to smear President Trump, that’s because that’s most likely exactly what happened. Rowling is just one of the many leftists out there who have committed themselves to discrediting Trump and painting him as a hateful, intolerant bigot, even though Trump is anything but.

It’s incredibly ironic and extremely hypocritical how the liberals were quick to defend former president Barack Obama from anything that even resembled mockery or criticism, lecturing the rest of us on the importance of having respect for the office of the presidency, while at the same time showing President Trump no respect whatsoever.

This sort of viciousness towards President Trump is on full display throughout the mainstream media, throughout Hollywood, and perhaps most prominently, on college campuses across the country. Back in May, for instance, a commencement speaker at Hampshire College’s graduation ceremony openly called Trump a “racist, sexist, megalomaniac.”