Ethan Zuckerman is a name you might not be all that familiar with. I wasn’t either, until my friend and TRR associate Seattle4Truth informed me about some digging he did on this George Soros henchman who seems to be everywhere in the media. He’s not really a flamboyant presence, though. A quote here and there, an op-ed on CNN or The Atlantic, Zuckerman is content with injecting his globalist ideas into the body politic without actually becoming well-known.

I guess that makes it easier for him to operate as the bridge between progressive academia, the media, and their elected leaders.

His latest gambit is pretty much exactly what Seattle and I talked about earlier this year when we had an in-depth discussion about his BLACKPILL documentary. Zuckerman, one of Soros’ top thugs, literally wants to startup government-run social media so that the conservative blogosphere and their associated entities will lose political power.

The globalists aren’t even hiding it anymore. They want Big Brother and they want it now.

Oh, and like always, these scumbags can’t even make their case honestly. They have to resort to lies…

Read something unbelievable on the Daily Caller and you are likely to find it echoed on the Washington Examiner, InfoWars, and Breitbart. This echo chamber was responsible, we believe, for taking a fringe position on ending legal immigration, making it central to the 2016 presidential campaign and ultimately, for helping the candidate willing to support this position rise to the presidency.

File that under Things That Never Happened. Donald Trump never supported a moratorium on all immigration. I have heard that position stated, but never by Mr. Trump. He did talk about ending illegal immigration, which is a noble goal, in my view. Of course, if you’re a globalist hack interested in seeing the demise of nationalist principles and want to send us all down the road to a World Government, then you probably love illegal immigration. 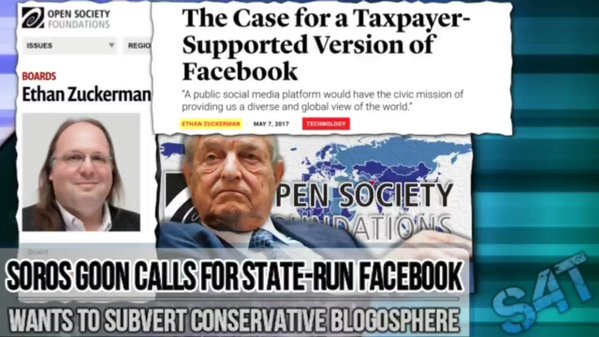 Zuckerman is on the global board of Soros’ Open Society Foundation

The truth matters little when your paymasters call the shots. And for a guy like Zuckerman, he probably actually believes this garbage…the money in his pocket is just the cherry on top.

The best public broadcasters in strong democracies—Canada, the United Kingdom, Germany—use their position to bring a wide range of perspectives and voices into the broader public dialog. This commitment to diversity goes beyond ensuring that the right and left both have a voice: CBC goes out of its way to feature indigenous First Nations voices, while the BBC maintains a vast reporting network in Africa and Asia…

Private platforms like Facebook are under no obligation to provide us a diverse worldview. If it is more profitable to bring us baby pictures from our friends than political stories, or to isolate us in a bubble of ideologically comfortable information, they will. A public social media platform would have the civic mission of providing us a diverse and global view of the world. Instead of focusing resources on reporting, it would focus on aggregating and curating, pushing unfamiliar perspectives into our feeds and nudging us to diversity away from the ideologically comfortable material we all gravitate towards.

It’s almost like I’ve heard this garbage before, as if there’s some sort of globalist cabal who wants to tell us all what to think and how to act so they can control us with more efficiency. You don’t even have to call it a conspiracy, however. It’s all right here in the open. Soros and his gang of academics and technocrats are openly calling for the censorship of sites like this one, sites like InfoWars, Breitbart, and The Daily Caller.