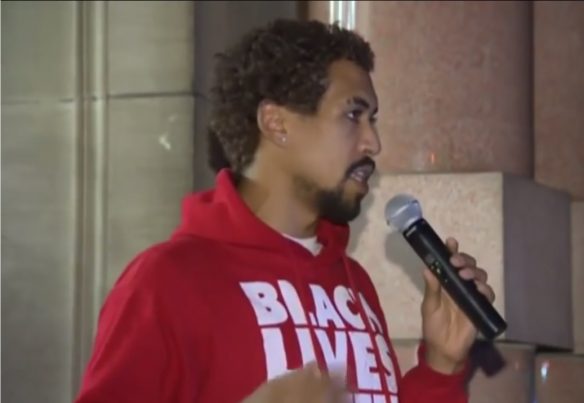 Another community “activist” is in the spotlight for all the wrong reasons. Micah Rhodes, co-leader of Portland Resistance, a group dedicated to fighting Donald Trump and white nationalism, has been arrested.

The 23-year-old activist, who is currently on parole for Sex Abuse I and Sodomy I, is now facing four new charges of second-degree sexual assault of a teenage boy and girl, one of whom he met on the gay dating app Tinder.

According to Oregon state records, Rhodes is a registered sex offender, but his name doesn’t appear on the state-run website because he isn’t considered ‘predatory’ under the liberal interpretation of the law.

Aside from the sex abuse charges, Rhodes, who is heavily involved in Portland’s anti-Trump protests, has also been arrested numerous times over the last few months for disorderly conduct and blocking traffic during Portland’s anti-police protest. [RELATED: See more hidden news at Censored.news]

According to Portland Resistance, the “movement is not an Anti-Trump movement. It is a movement of love. We have realized that due to Donald Trump’s hateful rhetoric and dangerous policies that we need to organize in our city right now to make sure that we are a beacon of light in a dark time.”

They also go on to state, “In order to survive a Trump Presidency, the rise of white nationalism, and widening income inequality, there needs to be a strong resistance.”

Portland Resistance is no different than most leftists, anti-capitalist movements; it receives support from George Soros via his front group Moveon.org, which is heavily involved in creating almost all of the color revolutions across the United States.

In a recent tweet, Portland Resistance founder Gregory McKelvey was asked “Does George Soros contact you directly or does he send one of his people?” The resistance leader responded, “he just sends checks.” McKelvey seems to enjoy throwing his Soros connection around on Twitter making snarky remarks such as “I got bused in directly from the George Soros mansion! Fun ride.” In another cynical tweet, he replies “most my comrades just spend their money taking people’s guns away and forcing them to gay marry.”

McKelvey can sarcastically scoff at the Soros connects all he wants, but one thing we can prove is Soros has financed most of the violent anti-Trump protests across America via his Open Society Foundation.

It’s going to be a long eight years for the left if Donald Trump gets re-elected.  If perverts, suspected murderers, and Sharia Law sympathizers continue to be the best that the left has to offer, they are in much bigger trouble than anyone thought.