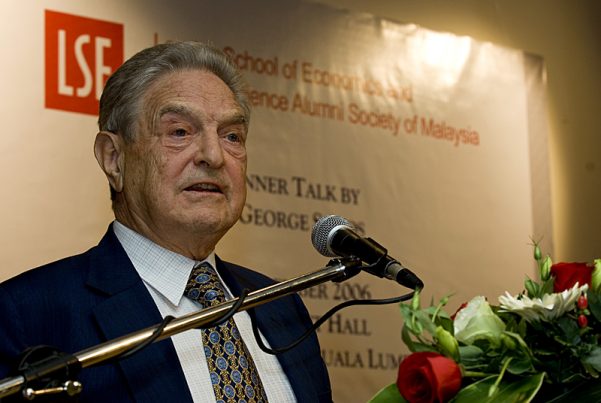 If you’re not familiar with George Soros by now, consider it a homework assignment to look him up. To scratch the surface lightly, Soros, a white male, has heavily funded the Black Lives Matter movement in an attempt to advance his left-wing globalist agenda.

Soros is now financing the group which is helping Facebook flag “fake news.” But Soros isn’t the only left-winged financier of the new International Fact-Checking Network. The IFCN has drafted a code of five principles for news websites to accept. Facebook recently announced that it will work with third-party fact-checking organizations, who are signatories to the code of principles.

Stories on Facebook that have been determined to be fake by the fact-checking organizations will be flagged and disputed. There will be a link to the corresponding article explaining why, and disputed stories will rank significantly lower in the Facebook News Feed.

The INFC is hosted by the Poynter Institute for Media Studies. A cursory search of the institute revealed that the IFCN is openly funded by George Soros’ Open Society Foundation, the Bill & Melinda Gates Foundation, Google, and the National Endowment for Democracy. It’s sad to note that the left-wing is solely in charge of disputing news stories. The mainstream media are just as guilty of being vilified news outlets when it comes to misconstruing things, but now all their news will be real, and all opposing views will be flagged. The fact checking organizations are basically granting the left-wing the ability to produce all the fake news they wish.

Poynter has hosted controversial journalism programs before, including one that got accused of downplaying the threat of global Islamic terror. FoxNews.com reported that the course suggested that reporters should keep the death tolls from Islamic terror in context by comparing the death tolls to those killed annually by malaria, HIV/AIDS, and other factors. The course went on to teach reporters that the term “Jihad” means internal struggle, and discussed “right-wing activists” as people who attempt to link American Muslims to terror.

It’s clear how big of an impact the INFC will have on those who get their news from social media platforms, like Facebook. The course goes on to provide a good-journalism tip to reporters, suggesting that they check if an interviewee has a bias or stake in the material being covered, but only goes on to cite examples of anti-Muslim groups.

It’s hard to believe that the left-wing is winning the war on news control. The American people continue to embrace the companies and technologies that are destroying us, ultimately destroying themselves.